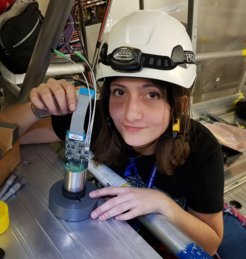 Water Cherenkov detectors (WCD) are arrays of detectors that are used to detect gamma rays with very high energies from ground. When gamma rays reach our atmosphere, they form electromagnetic air showers, which result in secondary particles. WCDs use the Cherenkov effect to record these secondary air shower particles and provide a wide field-of-view along with an approximately 100% duty cycle. The High Altitude Water Cherenkov (HAWC) gamma-ray observatory is such an array of WCDs operating from the Northern hemisphere in central Mexico. The Southern Wide-field Gamma-ray Observatory (SWGO) will be a next-generation observatory in the southern hemisphere consisting of an array of WCDs, complementing observatories such as HAWC.

My PhD work is focused on the testing and characterization of detector units for SWGO as well as the prototyping and testing of the lake design. The first part involves the full characterization of unit components such as the light sensors and materials being used for the SWGO detectors. The Lake design for SWGO is an alternative to a HAWC-like design with individual water tanks and a LHAASO-style design with artificial ponds. In this alternative design, bladders filled with clean water are deployed near the surface of a natural lake, where each bladder is a light-tight stand-alone unit containing one or more photosensors. It is planned that the development and testing of the prototypes for the lake concept will eventually result in the testing of a proof of principle array in a natural lake. Finally, I will analyze existing HAWC data for high zenith angle sources that would be detectable with SWGO in the future.