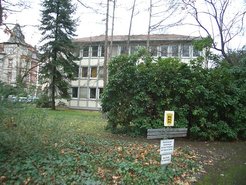 The Astronomisches Rechen-Institut (ARI) covers a wide range of research areas including cosmology, gravitational lensing, galaxy evolution, stellar dynamics, and astrometry. Moreover, it plays a leading role in the preparation of the Gaia satellite mission of the European Space Agency and in special-purpose high-performance computing. 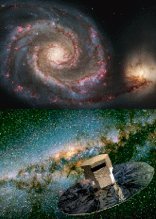 One of the primary research foci at the ARI is galaxy evolution. Our goal is to understand how galaxies formed and evolved over a Hubble time and to refine the corresponding cosmological models. Stellar populations are valuable witnesses of the formation history of a galaxy, providing a fossil record also of its chemical evolution and accretion history. Stellar dynamics yield information on the underlying mass distribution, gravitational potential, and dark matter content as well as on past interactions. Studying the properties of galaxies in groups and clusters constrains their assembly histories, the origin of different galaxy types, and the cosmological substructure problem.
The ARI participates in several large international survey projects including the Sloan Digital Sky Survey (SDSS), the Radial Velocity Experiment (RAVE), Pan-STARRS, and ESA's cornerstone satellite mission Gaia. Gaia will uncover the detailed evolutionary history of our own Milky Way.
These observational efforts are complemented by extensive dynamical and chemo-dynamical simulations on special-purpose supercomputers.

The other main research focus at the ARI is gravitational lensing, studying various applications of light deflection as caused by planets, stars, galaxies, and clusters of galaxies. Microlensing of distant quasars and of stars in the Milky Way or nearby galaxies may help to detect (or exclude) compact dark matter candidates. Examining and modeling giant arc systems produced by the lensing effect of galaxy clusters on background galaxies helps to measure the mass and the mass distribution of the lensing cluster. By monitoring the lightcurves of microlensed stars in the Galactic bulge and by searching for short time-scale deviations, planets around other stars are being detected.
Moreover, the ARI is involved in efforts to detect gravitational waves directly, e.g. via ESA's Laser Interferometer Space Antenna (LISA).