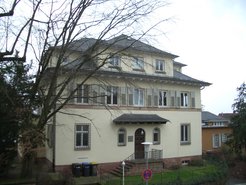 The Institute for Theoretical Astrophysics (ITA) at the University of Heidelberg carries out research in cosmology, extragalactic astrophysics, galactic dynamics, star formation, stellar evolution and astrochemistry.

Understanding the formation of stars in galaxies like our Milky Way or in the early universe is the goal of the star formation group at ITA. Stars form by gravoturbulent fragmentation of magnetized interstellar gas clouds. The supersonic turbulence ubiquitously observed in Galactic molecular gas generates strong density fluctuations with gravity taking over in the densest and most massive regions. Collapse sets in to build up stars and star clusters. This process is studied by means of numerical simulations and theoretical model calculations. Planets and planetary systems can build up in the accretion disks around new-born stars. Studying the physics of accretion disks, the process ofdust formation in these disks, or the formation of structures in the B-ring of Saturn are important research topics at ITA. Other major fields of research are the numerical modeling and interpretation of cosmic radiation fields and the atmospheres of cool giant stars. 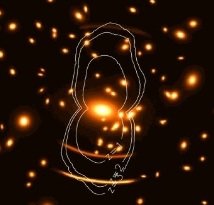 The distribution of galaxies on the sky, their X-ray signature and magnetic fields are considered in the group network of galaxy clusters. The light deflection by gravity is another major research topic at ITA. gravitational lensing leading to (de-)magnification and distortion of the observable images can be caused by stellar mass objects to galaxy clusters. Maps of the dark-matter distribution in galaxy clusters can be constructed from the weaker distortion of very many galaxies in their background (see left). On even larger scale researches at ITA consider cosmological questions as the nature of dark matter and dark energy, structure formation in the universe, or the anisotropy of the CMB as observed by WMAP.