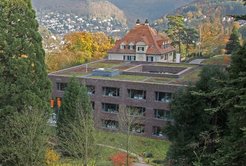 The Heidelberg Institute for Theoretical Studies (HITS) takes part in IMPRS-HD with the working groups on Stellar Evolution Theory (SET), on Astroinformatics (AIN), on the Physics of Stellar Objects (PSO), and on the Theory and Observations of Stars (TOS).

In 2013, the "Astroinformatics" group was established at HITS. Our goal is to develop new methods and tools to deal with the exponentially increasing amount of data in astronomy. The group is interested in the development of improved photometric redshift regression models. This is a key tool in the analysis of the huge amounts of data provided by upcoming major survey projects like the Square Kilometer Array (SKA), Gaia, or Euclid. Also of crucial scientific interest are methods and tools for extracting and filtering rare objects for detailed follow-up analysis with 8-m class telescopes. Estimated occurrences of only a few objects per million make manual inspection of the existing catalogs impossible. Morphological classification of galaxies based on imaging data as well as high-dimensional similarity measures are the other research interests of the Astroinformatics group. These are initial stages in providing more exploratory access to the data archives for astronomers.

The "Stellar-Evolution-Theory (SET)" group investigates the turbulent and explosive lives of massive stars. Currently, the group focuses on massive binary stars and the intricate merging process. Mergers produce strong magnetic fields, and the merger products may forge highly-magnetised neutron stars in their terminal supernova explosions — these magnetic neutron stars, known as magnetars, are the strongest magnets in the Universe. Stars are the basic building blocks of the visible Universe and produce almost all chemical elements heavier than helium. Understanding how stars transformed the pristine Universe into the one we live in today is at the heart of research in astrophysics.

Understanding the physical processes that take place in stars and how these change as a function of stellar evolution is the ultimate goal of the "Theory and Observations of Stars (TOS)" group at HITS which has been established in 2020. We focus, but not limit ourselves to, low-mass main-sequence stars, subgiants, and red giants. These stars are interesting as they go through a series of internal structure changes. Furthermore, these are potential hosts of planets and standard candles for galactic studies (core helium burning red-giant stars), and hence exoplanet studies as well as Galactic archaeology, will also benefit from an increased understanding of these stars.

Our research group "Physics of Stellar Objects" seeks to understand the processes in stars and stellar explosions based on extensive numerical simulations. Newly developed numerical techniques and the ever growing power of supercomputers facilitates a modeling of stellar objects in unprecedented detail and precision. A primary goal of our group is to model the thermonuclear explosions of white dwarf stars leading to the astronomical phenomenon of Type Ia supernovae. These are the main sources of iron in the Universe and have been instrumental as distance indicators in cosmology — leading to the spectacular discovery of the accelerated expansion of the Universe. Multi-dimensional fluid-dynamical simulations in combination with nucleosynthesis calculations and radiative transfer modeling provide a detailed picture of the physical processes in Type Ia supernovae but are also applied to other kinds of cosmic explosions.